History of the Omineca Ski Club

Some background about the club 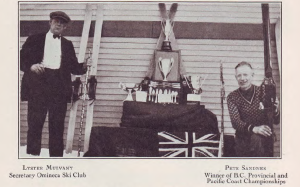 From “Cross Country Skiing – a Guide” printed by the Omineca Ski Club in 1983.

The Omineca Ski Club was founded in 1927 and can therefore lay claim to being the oldest cross-country ski club in British Columbia and possibly the oldest club in Canada.

It is recorded that early in September 1927 the idea of forming the Omineca Ski Club first occurred to “an impromtu gathering of timber cruisers and trappers – a decidedly cosmopolitan party with a slight Scandinavian majority” as they settled in for an evening in the cosy sitting room of the Omineca Hotel.

This group called a meeting for October 15th at which the historian noted “that the election of officers and the usual routine were quickly disposed of, followed by a most enjoyable dance”.  Perhaps this description sums up the role of the club in the community – an organization that disposes of necessary business in order to clear the way for the enjoyable activity of skiing.

In the early days of the club, as is still the case today, the club was a help to the recreational skier as well as the racer.  In the early days, however, the two types of skiers were not perceived as being very different from each other.  Everyone who liked to ski participated in the club’s activities and when the races were held you competed if you were a better skier or a bit more venturesome than those who opted for the role of spectator.  If you raced you were not of another class entirely, a “racer” instead of a “touring skier” as the distinction is often made today.

The early ski tournaments took the form of a festival.  Held in mid-February, they were a welcome break in the long haul from New Years to Easter.  The children were given a school holiday so they would not miss any of the action.  There were competitiors from interior ski clubs such as Smithers, Wells and Revelstoke, and usually from Vancouver and Camrose, Alberta as well.

The jump hill was located just past the bridge across the lake.  The cross country races started and ended on the main street in front of the Royal Bank building with the whole town watching.  After three days of competition, the big dance with the awarding of the prizes and the crowning of the Snow Queen wound things up.

Some of the skiers who competed at Burns Lake in the early years were Isaac Kuusela, Carl Lindaas, Pit Sandness and Knut Knysven.  The Gerow boys, the Smith boys and the Setterstrom boys were among the younger competitors who grew up in Burns Lake as distinct from the older racers who were immigrants from Scandinavia.  Peggy Saunders (now Forbes) emerged as an outstanding female racer towards the close of this early period.  The most outstanding competitor was Kaare Engstand who represented Canada at the 1932 Olympics at Lake Placid, New York.  This era of skiing lasted until World War II, when the club became inactive.  After the war the club revived with alpine skiing now introduced and received with enthusiasm.  At this time many competitors went four ways, competing in jumping, cross country, slalom and downhill.

In 1952 the National Championships were held at Vancouver which made it feasible for Burns Lake skiers to compete.  Club coach Gordon Williams prepared his team well for the events.  He coached the skiers in alpine racing and encouraged them to train for cross country.  The results were well worth the effort with Alford Eakin placing first in the junior class in crooss country, second in the slalom and third in th giant slalom.  Doug Rowland placed third in the downhill.  In the senior class Niilo Itkonen, then a recent immigrant from Finland, placed first in cross country.  It was an unprecedented triumph for the Omineca Ski Club.  Gordon Williams left the Burns Lake area soon after this.  Unfortunately no one continued his work with young skiers and the excellent team gradually fell apart.

After another slow period the club began to revive in the 1960s and has been an active group in the community since that time.  A great deal of work was done, mainly by volunteers, to establish the club at its present site on highway 35.  The alpine area was established with tows and a modest clubhouse and later the cross country trails and cabins were added.  At present only the cross country branch of the club is active.  The club maintains a good trail system for the use of recreational skiers and racers, and every year offers lessons for all those interested in improving their skills.

In 1975 the Omineca Ski Club hosted the senior national cross country championships and in 1977 the national junior championships were held at Burns Lake.  The local skiers who have excelled include Esther Miller, nine years on Canada’s national team, Marvin Strimbold, twice a Shell Cup winner as best in his class in Canada and Lana Lindaas and Chris Paulson bringing home silver medals from the national championships.

Skiing has deep roots in the history of the Lakes District.  The band of timber cruisers and trappers who started it all in 1927 would be glad to know that their club is now over half way to completing its first century of service to the community.

was published annually from 1923 to 1940.  There are some annual reports from the Omineca Ski Club to be found in these old volumes starting with 1927 and part of the story written above.

Or head to the Canadian Ski Museum website to see lots of old equipment and the complete volumes.